Does it matter whether central venous access devices are inserted into the right side or left side of cancer patients?
We have found strong evidence that central venous access devices inserted into the right side of cancer patients more than doubles the risk of early infection compared to insertion into the left – but we don’t know why.
Associate Professor Mark Jones is a biostatistician from Bond University Institute of Evidence-Based Healthcare. He has been involved in the research described in this blog since 2004 and is curious to find out the mechanism that could explain the novel findings. 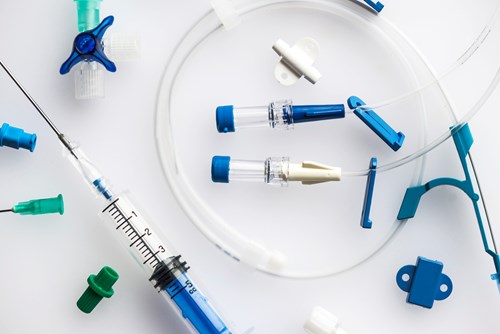 As part of a quality improvement initiative, a prospective database was implemented at a tertiary Brisbane hospital in 2004 to capture data on all central venous access devices (CVADs) inserted into cancer in- and out-patients.

Four years later we analysed the collected data, observing expected differences in infection rates related to patient diagnosis, line-type, and how many previous lines had been inserted. However, we unexpectedly found a higher infection rate for lines inserted into the right side compared to the left side – the rate was higher by 60%. This novel finding was published in 2011 and led to a team of clinicians and researchers from two Brisbane hospitals applying for and obtaining funding to conduct a randomized controlled trial.

We speculated that the increased risk of infection in right-sided lines may relate to 90% of people being right-handed, as there would be increased movement on the right side and greater associated bacterial contamination of the catheterized limb. To test this hypothesis, we randomized patients to CVAD insertion into the dominant or non-dominant side of the body.

In the main analysis of the trial, we had found some evidence that left-handed inserters were associated with higher infection rates than right-handed inserters although this finding was based on a small number of patients who had their lines inserted by left-handed operators. Unfortunately, this finding could not be further explored as handedness of inserters had not been collected in the prospective observational database.

Findings from our exploratory analyses showed clear evidence that side of insertion was associated with early infection risk with right-sided insertions having more than double the risk of left-sided insertions. In contrast, there was no association identified with late infection. Subgroup analysis suggested the results were consistent across the two hospitals, and across the different line-types.

These findings proved difficult to interpret because the increased risk of early infection, but not late infection, suggested a mechanism related to line insertion. But this seems counter-intuitive as interventional radiologists in our team believe insertion of lines into the right-side are typically more common and straight-forward than insertions into the left.

Although our findings appear statistically robust and consistent across two different hospitals, the mechanism is unknown. Further, there appears to be little previous research reported on infection rates for left compared to right sided insertions of CVAD. Hence, we don’t believe our results can be generalized to other hospitals until further studies have been undertaken.

In this regard we encourage others to look at their data on CVAD insertions for cancer patients. If our findings can be replicated and the mechanism underpinning the increased risk identified, insertion of CVAD into the left-side may be a simple way to reduce the risk of infection in patients with cancer.