Can digital working influence the numbers of beds closed by outbreaks?
In this blog the author explores the possibility that changing infection prevention and control practitioner practice via digital working can influence the number of beds closed by outbreaks in a district general hospital.
Emma Hoyle is the Associate Director for Infection Prevention and Control at Dorset County Hospital NHS Foundation Trust. Since 2014, Emma has been presenting at various national conferences and meetings on the importance of digital working in collaboration with Infection Prevention & Control and the achieved benefits.

‘Nobody expects the Spanish Inquisition!’

This would have been the greeting expected by the Infection Prevention and Control Nurses (IPCNs) at our Trust before we introduced digital working for IPC. Now, the greeting is completely different and far more welcoming!

To implement digital working was not a new concept for us. In 2010 a bespoke tool was introduced to the Trust. However, this became unsupported in practice as the IT team was unable to maintain it. Three years later, a fully supported clinical surveillance system (CSS) called ICNET was put in place as an app developed for mobile devices, with a plan to future proof infection control at the Trust.

Support for the CSS was overwhelming by the Trust Board. The Board recognised that IPC could work efficiently and reduce risk in the clinical setting by utilising the CSS.  Engagement from the Trust Board has been consistent, and infection control remains high on the quality agenda.

What difference has a digital tool made to the IPC Team?

Following its introduction the IPC Team (IPCT), the CSS changed the way the team worked. No longer were we ‘office based’, we were fully mobile and no longer restricted to the desktop computer, as all that was needed was on the tablet device.

Daily ward rounds were introduced to all clinical areas in the Trust. For the first few hours of the working day the team will visit each ward. During these visits we can:

In addition, during the ward rounds any concerns can be attended to directly with staff. Knowing that an IPCN is visiting the ward has meant that staff have an immediate contact point to answer queries that may affect their shift plan.

It is noticeable that the IPCT are now seen as part of the clinical team in every area. We are welcomed and have developed a pastoral relationship with staff. 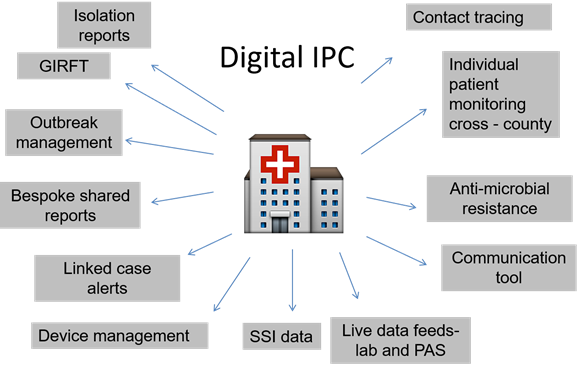 The impact on outbreak management

All of this being said, outbreaks can and do happen. However, use of the CSS and has lead to outbreaks being recognised quicker than before, and subsequently beds closed for significantly less time than previously.

Daily ward rounds include surveillance and the module in the CSS enables us to spot trends and act fast. For example, if an area has increased incidence of patients with symptoms of norovirus the ward will quickly highlight this to the IPCT directly. As the IPCT manage the ‘patient isolation list’ we are able to relocate patients to reduce the potential contact time whilst samples are being processed, and commence critical cleaning processes.

Within the CSS outbreak module we are able to generate reports for meetings and board – reducing our time in preparation. Contact tracing can be performed at the press of a button, which is particularly useful in flu season!

Implementing digital working has enabled a full change in our practice. No longer are we office based, and are accepted as a credible team players within the clinical setting. All of the IPCT have maintained their clinical skills and demonstrate this in practice, providing hands on care where and when required. Our availability to develop and train staff has been enhanced. Time has been released to care.

We recognise that the tool is only as good as the data inputted, and reliance on digital technology should not be taken for granted. However, as the benefits outweigh the risks we shall be continuing to use the CSS and are in planning cross county to implement a county-wide system……another blog for another time?

More from our blog
Why do we need an open access journal, when we have the JHI?
Read more
“It’s in Your Hands”: Making hand hygiene infectious
Read more
Gloves protect healthcare workers and patients, right?
Read more