Life as a Healthcare Scientist
Many different roles within healthcare contribute to infection prevention and control. In this guest post, we look at the life of a Healthcare Scientist working within IPC teams.
Our guest blogger, Dr Elaine Cloutman-Green, is a Trust Lead Healthcare Scientist/NIHR Clinical Lecturer in Infection Prevention Control. Elaine is also a past recipient of a HIS Small Research Grant, a Mike Emmerson Early Career Award and a Public Engagement Grant.

My journey in healthcare and clinical science 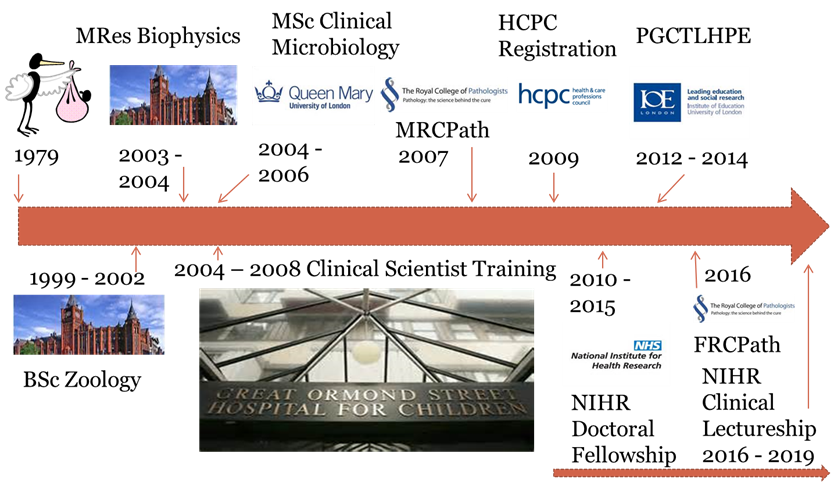 What is a Healthcare Scientist?

Healthcare Scientists fulfil a number of different roles, mainly within the NHS. There are nearly 50 specialties (see below), which are split into physiological, physical and life sciences. Within physiological sciences most scientists work directly with patients in areas such as audiology and sleep science. Physical scientists have wide-ranging roles, from clinical engineering to medical imaging. I work within Life Sciences where most careers tend to be laboratory-based. 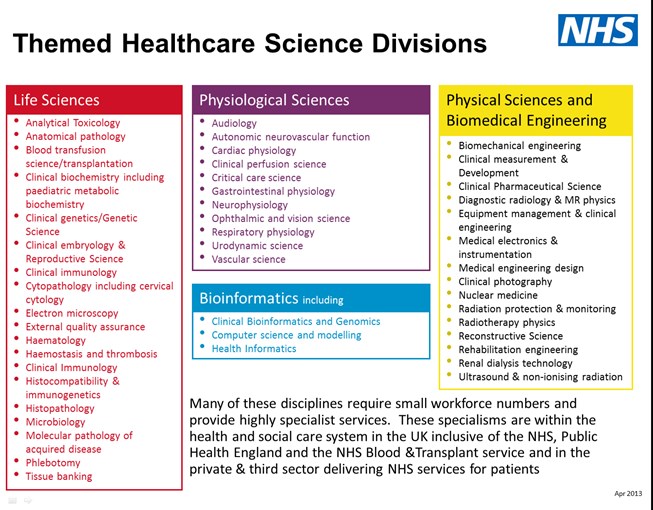 What is the job of a Healthcare Scientist in Infection Prevention and Control like?

The great thing about my job is that every day is different. I work as part of a multi-professional team consisting of nurses and doctors and I liaise with other scientists every day. Unlike many Healthcare Scientists within life sciences, my job has a lot of patient facing components and broadly consists of three main components: clinical work, research and education.

When I started working in Infection Prevention and Control (IPC) I was the only person, that I knew of, who was working as a clinical member of the infection control team.  I started out shadowing one of the IPC nurses in my final pre-registration year and by the end of that year I was carrying the bleep and undertaking the role on a day to day basis.  Life has changed quite a lot since then, the role has developed, but interestingly it is still quite hard to explain what it is that I do as there are not that many of us around.  That said, we are growing in number and the impact that we have on teams and patients is becoming clearer to Trusts.

My clinical work involves both responding to cross transmission of infection and implementing national policies on their control. All of the research I do is targeted at making the clinical part of my role more effective. How can we intervene differently? Are there new scientific techniques we could be using? How can we establish an evidence base for what we are currently doing? Finally, a large part of my role is being involved in education, as changing practice doesn’t work if you don’t bring people with you!

What can Healthcare Scientists contribute?

One of the great strengths of Healthcare Scientists roles is that they evolve linked to the needs of the service.  Having a Healthcare Scientist on board can be incredibly useful in addressing (for example) antimicrobial resistance that has complex underlying biological mechanisms,  and managing the vast data sets that are becoming part of modern day life within IPC.  Scientists have been trained to look for patterns and to create and evaluate evidence, these are key skills for working within infection control - no matter what your setting.

In my case that means I have a strong research focus, with an aim to change what we do in routine practice based on the evidence collected.  I hold an NIHR Clinical Lectureship and have brought in over two million pounds of research funding to support evidence based change within my trust.  Clinically, I now undertake a role similar to the infection control doctor and because of this undertook FRCPath by exam to be able to practice at the same level as a Consultant Microbiologist.

I know of other Healthcare Scientists who are leading IPC teams or taking a lead role in establishing laboratory sections to improve diagnostics and outbreak detection.  This variety really shows that no matter the size of your infection control team, or the workload that you face, there will be a way that your Healthcare Scientists can support you in delivering the highest quality of care for your patients.

Dr Elaine Cloutman-Green is a past recipient of a HIS Small Research Grant (2010), a Mike Emmerson Early Career Award (2015) and a Public Engagement Grant (2018).

More from our blog
How important are nutrition and hydration in infection prevention and control?
Read more
Preventing fake news: controlling the outbreak of misinformation
Read more
Ambitions and actions for the next 5 years, supporting the 20-year vision for AMR: where is the IPC?
Read more